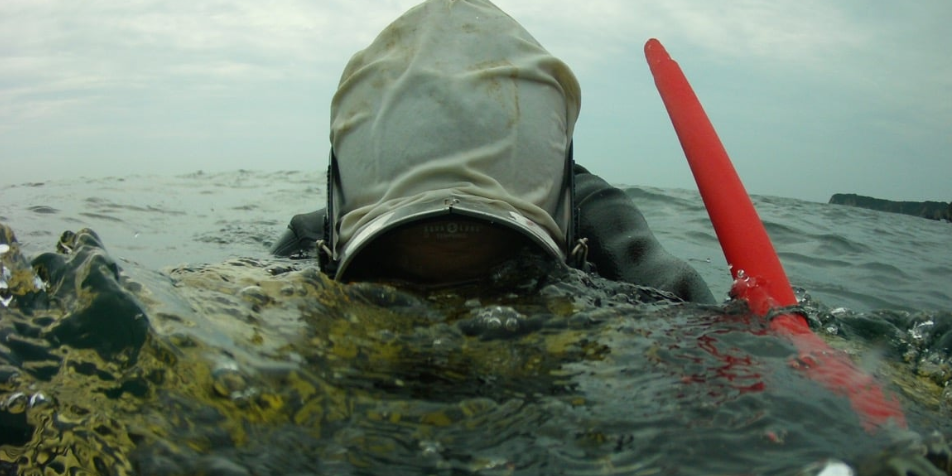 Diving Into the Past – A Modern Freediver Visits the Ama

How long have humans been visiting the underwater world assisted only by their natural born attributes?  Most modern freedivers are aware of the rich history of the sport and one of the earliest freediving cultures known being Japan’s Ama divers.  The earliest evidence of Japanese freedivers dates back to 300 BC.  The word ‘Ama’ means ‘female breath-hold diver who gathers sea creatures for their livelihood’ and this is precisely what they continue to do today.  I traveled to Mie Prefecture which is a lovely area south of Nagoya and has one of largest remaining populations of Ama in Japan.  I am one of the few westerners lucky enough to dive with the Ama and they shared with me their perspective on freediving. 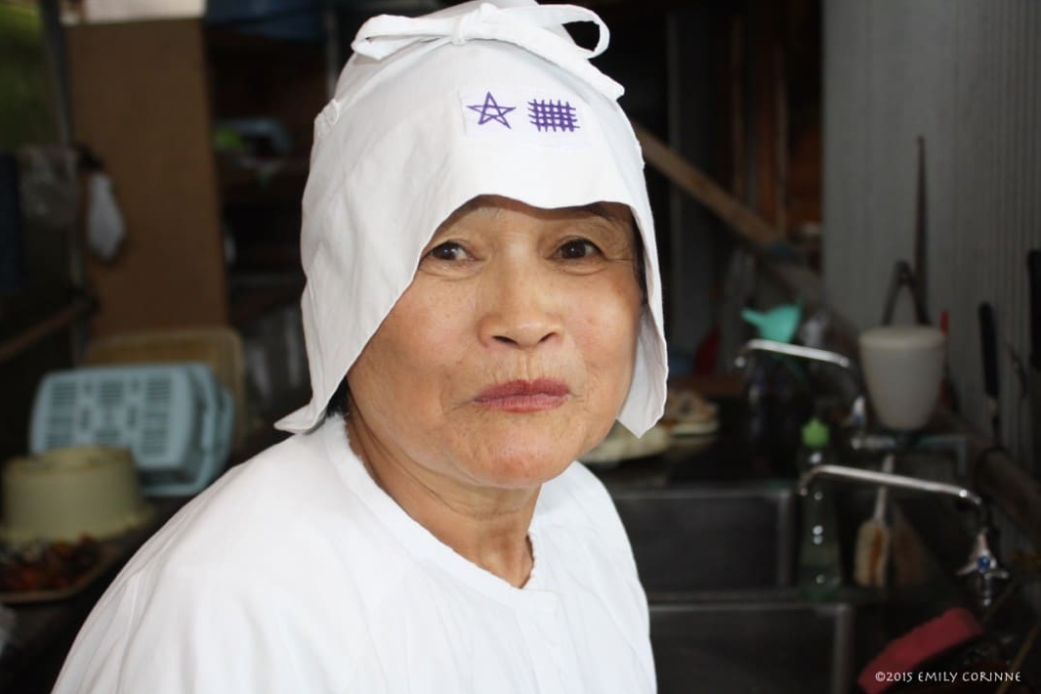 Sayuri is in her mid-60s and is one of the best divers in Toba City. She practiced Funado diving (variable weight) with her husband in the past but stopped after an ear injury. She told me that she doesn’t like to fish with her husband anymore because he works her too hard!

The Ama of today are very selective as to which modern diving paraphernalia they use.  With sustainability always in mind, they base their decisions on whether or not a piece of equipment will make the diving too easy which can lead to over-fishing.  The original Ama worked essentially in the nude with neither wetsuit, mask, nor fins.  The waters of Mie can drop to 10ºC in the winter yet the Ama fish year round.  I don’t think I would have a chance finding an abalone like that! 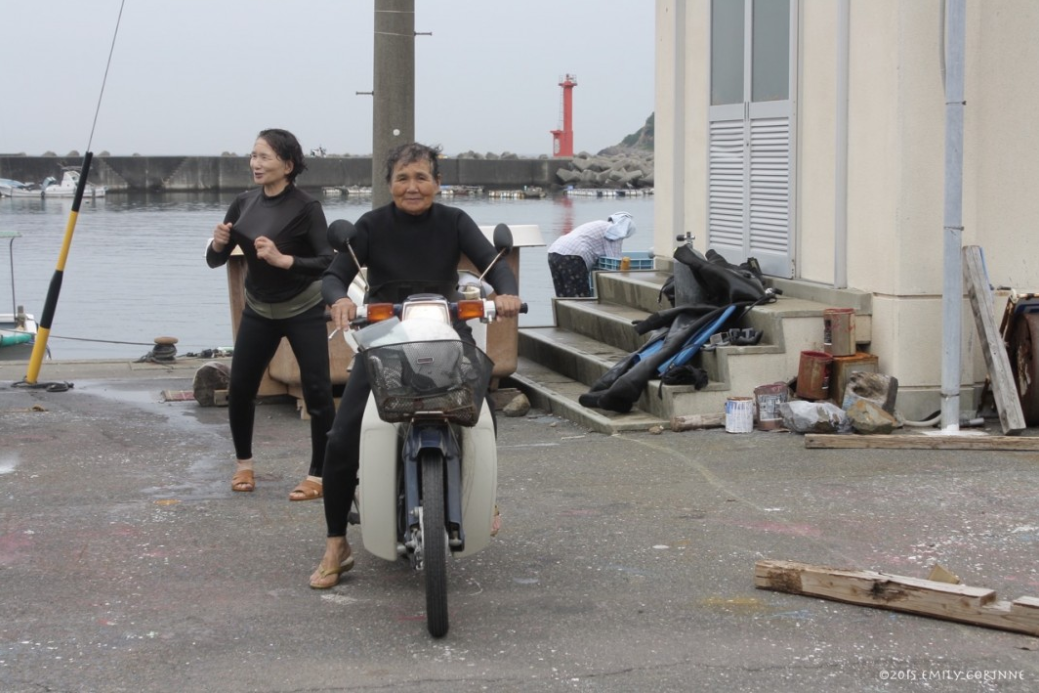 Fishing as the Ama do is one of the most sustainable existences a person can have. Most of the ladies keep gardens growing everything from tomatoes to rice and the shells of their catch are ground up for fertiliser.

The decision to wear neoprene was made approximately 50 years ago, yet not all modern Ama have adopted the wetsuit.  Goggles were the first modern adaptation in 1878, however, abalone stocks were seen to immediately decrease resulting in the decision to ban goggles for the next 20 years.  The first goggles were very basic with a special pressure release valve and eventually evolved into the large windowed, nose covering masks you see them wearing today. While fins and a mask are commonplace amongst the modern Ama, snorkels are not used as this makes scoping out the sea floor from your float “too easy” as they try to keep the human advantage to a minimum.  All the living Ama of today began diving with a mask however the older ladies do remember a time before neoprene and fins. 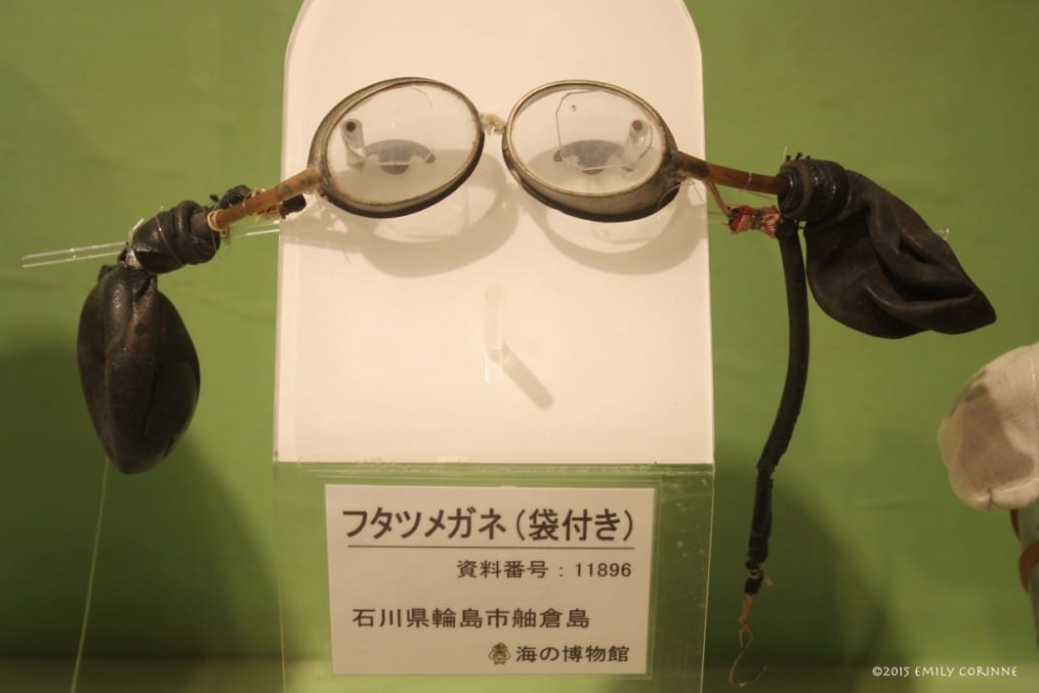 The first goggles (1878) were very basic with a special pressure release valve and eventually evolved into the large windowed, nose covering masks you see them wearing today.

The Ama use a very unique breathing technique call the Isobue or “sea whistle”.  The Isobue is used to relax the Ama during their surface intervals, which are very short, typically less than 60 seconds.  The whistle is a long and slow exhalation with the upper lip drawn over the lower.  The lips must be wet for the sound to result.  I met one Ama who could not manage the whistle sound so she pretends by whistling the normal way to fit in with the gals and make her presence known when she surfaces.

After speaking with several Ama from both Toba and Shima cities, I gathered that each woman has a slightly different technique.  What seemed the most popular was taking a very passive and small inhalation right before a dive.  They explained that they felt more relaxed after a small inhalation rather than a full breath.  I even met some Ama who prefer to exhale before a dive to as to sink faster and feel more relaxed and some that exhale as they descend on shallow dives.  However, they all agreed that a full inhalation was best before a deeper dive.

So what do the Ama have to say about equalization?  Each time I asked this question there was quite a commotion and discussion in the Ama goya (hut).  First I must mention that all Ama equalize hands free via ‘Beance Tubaire Volontaire’ BTV maneuver.  You will never see an Ama pinching her nose on decent as their masks do not feature the flexible nose pocket.  I was told that diving on an exhale or exhaling as they slowly descend helps them equalize.  The ladies described their methods to me, either sliding the jaw back and forth to open the Eustachian tube or some Ama use the root of their tongue to achieve equalization. 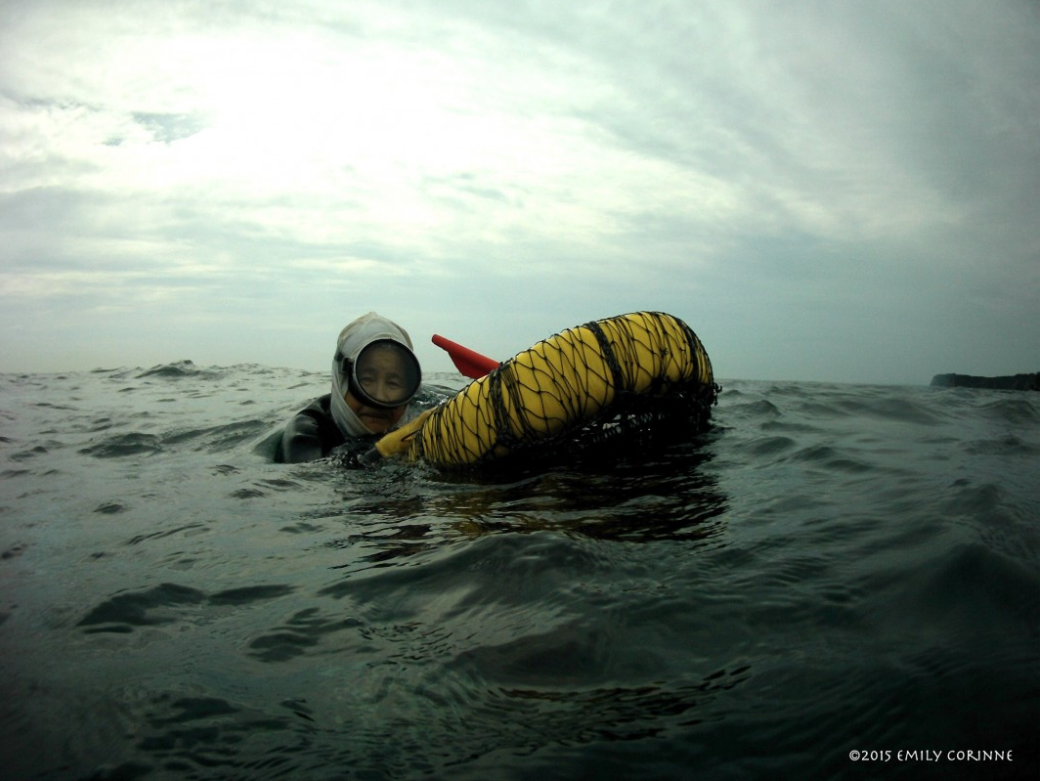 The modern float (Tanpo) used by the Ama for resting and storing the catch.

The Seimen and Doman are two symbols that the Ama traditionally wear on their hoods to ward off ill fortune.  It is believed that during trips made by Ama in the 8th century to the Kyoto area, bringing fresh seafood to the monasteries, that a Shinto priest, Onmyoji (Master of Yin-Yang), gave them the Seiman or five pointed star symbol.  The star shape is drawn with a single stroke, beginning and ending at the same point.  This represents the diver returning safely to the same point they began.  The other symbol, Doman, is a latticed pattern implying many eyes watching out for danger and a difficult shape to find the entrance and exit, meaning that ill fortune will also have a hard time finding the Ama diver.

Superstitious lore runs deep amongst the Ama culture including the Siren-like Tomokazuki, a demon that looks exactly like an Ama diver except without the protective Seimen and Doman symbols.  When the tempting Tomokazuki is encountered while diving, an overwhelming urge to follow her deeper is felt.

The Ama do not dive in buddy pairs but in groups of 5-10 women.  Each diver has her own float with an attached net bag for the catch.  A long line connects the float with either the diver’s belt or some of the women prefer to tie the float to seaweed as they have had issues with entanglement on bottom substrate before.   The captain of the boat that brings the divers to their location also keeps a sharp lookout for each woman.  Upon surfacing, an Ama will call out using her Isobue to alert others she is OK. 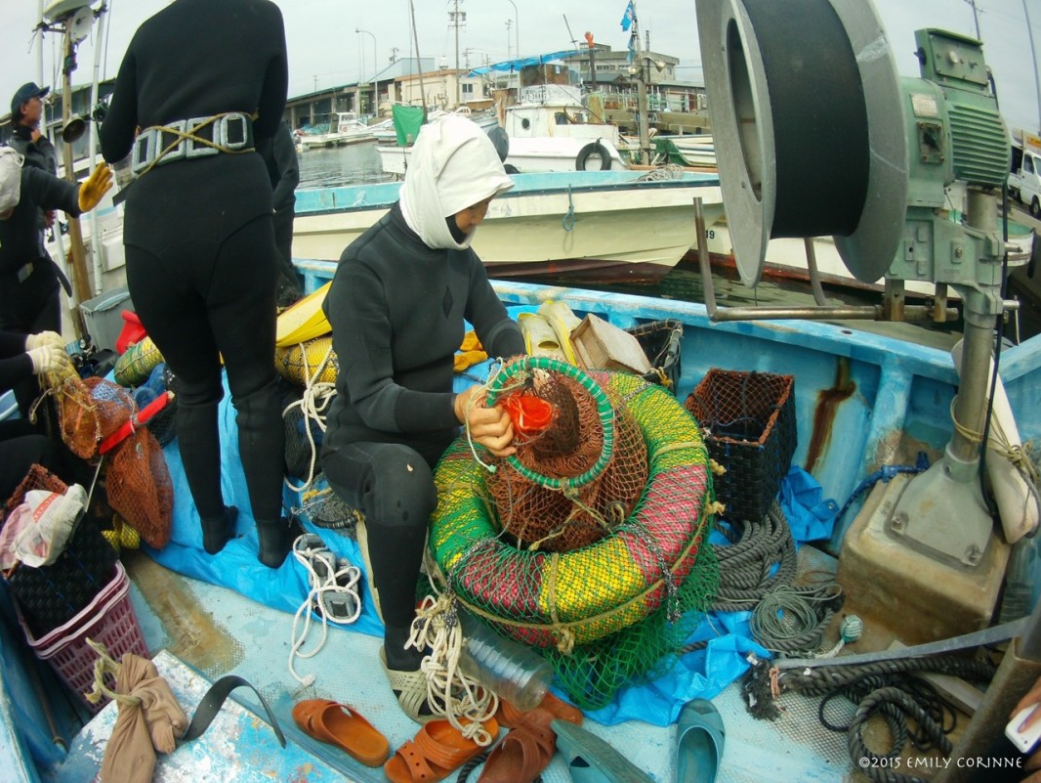 The Ama busily prepare for a productive day of diving.

From my experience diving with the Ama, I observed them diving in the rage of 8-15m with only some of the women diving deeper, up to 25m.  The Ama also practice variable weight dives called Funado in Japanese.  These dives are typically practiced in a husband-wife team with the husband managing a 20kg weight from his boat while his wife rides the weight down.  When the Ama is ready to come up, she pulls on the line and her husband quickly pulls her up. 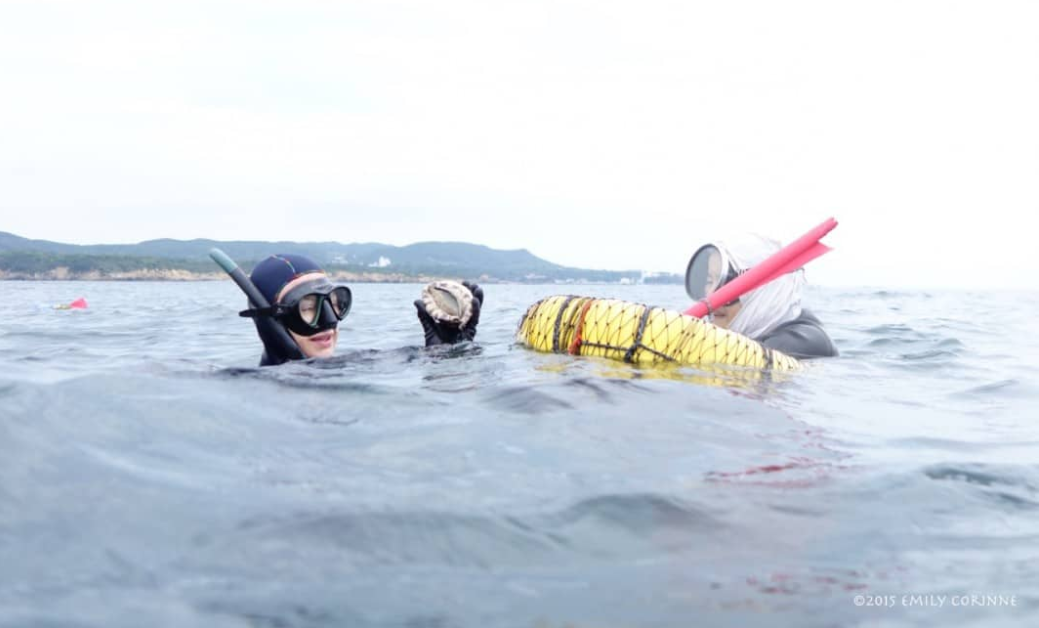 This was the only abalone I found as they are very well hidden and it takes a trained eye to spot them.

Freediving for Food not Fun

Discussions regarding the Ama’s future with Mr. Sato, the local marine biologist and also a male Ama diver, always led back to one determining factor: the prevalence of sea life in the waters surrounding Mie.  As the populations of various invertebrates continues to dwindle, will the Ama dwindle too? 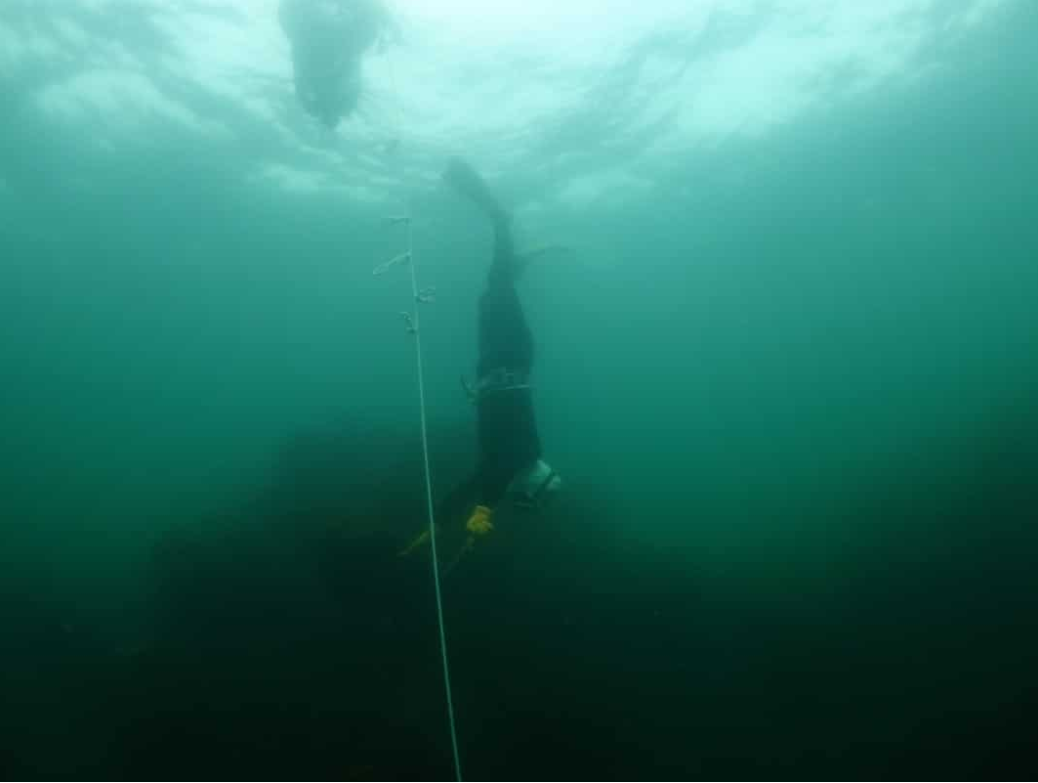 This Ama descends in the familiar fashion along the line of her float.

Soon, two new Ama from Tokyo will join the elders to begin their training.  These 18 year old girls have decided to leave the big city behind and embrace the traditional lifestyle.  This recent interest by the youth is a positive sign of growth in the Ama community, however, their fate is undeniably tied to the sea creatures they seek. 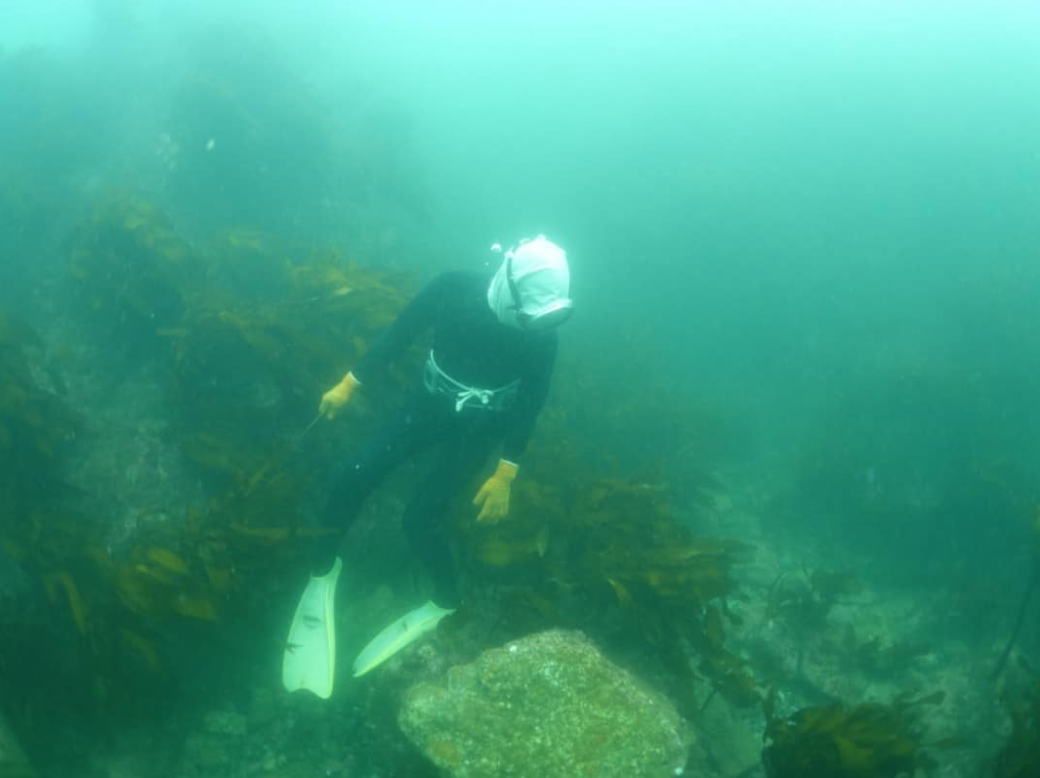 The Ama have sharply trained eyes and know just where to look.

In the future, can the motives of the Ama change from solely food to fun as well?  Just as the surf culture has developed communities that are closely link with the Ocean, could the Ama preserve their Ocean culture by shifting the focus more toward the pleasure of freediving?  Only time will tell, but surprisingly, some of the retired Ama who are too old to produce big catches, mention how much they miss diving and often accompany the others for fun.  So as much as the Ama emphasize that their goal is to fish, I don’t believe that is the only reason they come to work each day. 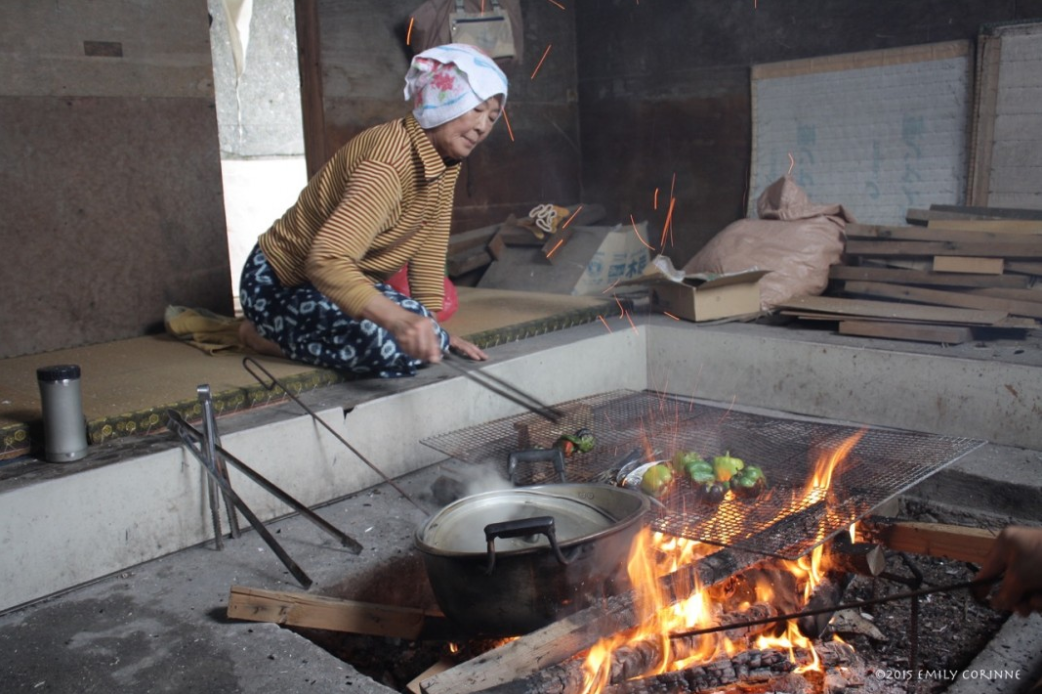 This is the real Ama goya, not the one seen by tourists. This Ama is cooking some peppers, sweet potatoes, and little fish as the other Ama prepare the catch of the day in the tourist restaurant.

I would like to thank the knowledgeable Tatsuya Sato M.Sc. for his lovely photography and priceless information, the lovely Dwinda Oafish Nurinsiyah for her wonderful bilingual skills and attention to detail, and the lovely Iwasaki Orie for her careful arrangements and interest in my trip.

Emily Corinne Tucker is a marine biologist, yoga teacher, FII freediving instructor, freediving athlete and writer. Emily strives to help her students develop a deeper connection with the ocean, its inhabitants, and themselves.  She is a Freediving Gold Coast Club Member