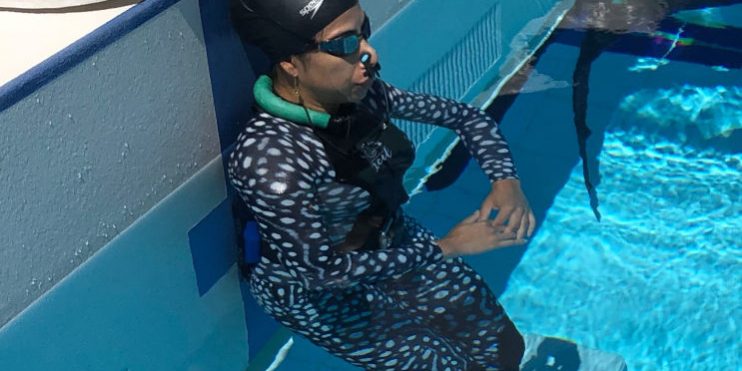 Recently Freediving Gold Coast ran a mini-competition: the AIDA Freediving Gold Coast Club DNF Mini-Comp on the 13th October 2019. Unfortunately, it was not without incident. One of the competitors, Maria Madero, entered our competition. It is a requirement under the world governing body, AIDA International, that a competitor must be a member of an AIDA National for one’s performance to be internationally recognised and ranked. To the credit of AIDA these rankings are shown on their website.  As Maria is an Australian citizen she went to the Australian Freediving Association (AFA) website and chose the membership category “Goldy Freediving Club” run by the AFA Clubs’ Officer, Gavin Phillips. Maria had been a member with them in the 2018-2019 financial year and in fact had started her freediving training with them.  However, over the last 10 months Maria had also joined our High Performance Coaching Program at Freediving Gold Coast. During this time, Maria had also volunteered her time as Safety Freediver for an AFA Affliated Club.

When I, the competition organiser, attempted to upload her name to the AIDA event page (where all freediving competitions are sanctioned or approved by their respective national bodies) I was unable to do so.  It stated “Pending by the AIDA National”. That is, it was not possible to register Maria for our competition. The Australian Freediving Association had put a block on her registration, if you like. I subsequently contacted Maria. She had been contacted by the AFA Clubs’ Officer and Goldy Freediving Club President, Gavin Phillips, to pay an extra $20 for Non-Club Affiliation membership as she was not training at Goldy Freediving Club. As Maria explained to me “How do they determine if someone will or will not train with them?”. A very valid point as Maria was excluded by this Club because she was training at another Club. This very practical example raises more questions than it answers such as the following:

So what is the solution? Simple. And, such a simple change would have avoided a lot of stress for Maria. I recommend that the AFA has a minimum membership fee of say $70 that is the base level membership for any club or member within the AFA. This must displayed and transparent on the AFA website. Call it the AFA General Membership. Of course, clubs may have additional fees above the base membership fee (e.g., coaching fees). But there must be a base membership fee – not an arbitrary fee. These extra fees are also clearly displayed on the AFA website. Now there you have it – total transparency in all AFA and club fees.  People like Maria would simply pay an AFA General Membership fee of $70. This removes all the different club membership categories including Non-Club Affiliated and replaces them with one category – the AFA General Membership fee. This simple change is legal under the present AFA Constitution and most of all fair, reasonable and equitable for everyone. It allows club training reciprocity and entering of AIDA competitions without the above bizarre situation ever happening again.  Come on Australian freedivers. The AFA can only be fairer and more equitable if it stands for everyone.

Diving Into the Past – A Modern Freediver Visits the Ama
November 28, 2019