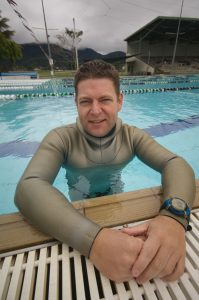 Ben Noble is a veteran of Australian freediving. His freediving career started like most, after watching the movie The Big Blue. Many years later on holiday in Fiji he happened upon an Australian freediver. By chance (or fate) they bumped into each other again back in Australia and started training together in Sydney. In 2005 Ben moved to the UK and started training with various clubs in London and also was a regular depth diver at Saltfree, a freshwater quarry on the Welsh border that was an icy cold 4 degrees at depth! It was here that Ben fine-tuned his depth diving and started to compete in 2006 in AIDA competitions around Europe and Egypt. In 2008 he became the first Australian to successfully complete the AIDA Instructor course and commenced teaching Australians how to freedive shortly after returning to Australian shores (in fact one of his students was a very keen and talented Mr Clinton Laurence!).

Ben has had a successful competitive career, some of the highlights include: 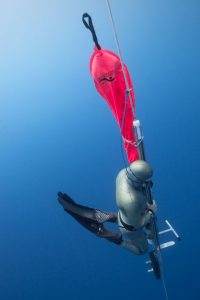 Ben Noble During No Limits Dive to 105m

Ben has kept incredibly busy out of the water over the years as well. Frustrated as a newbie to the sport and having no resources available in Australia, Ben set out early to gain as much knowledge and experience whilst overseas in order to bring it back to Australia and grow the sport. In 2006 he co-founded the Australian Freediving Association and was President of the AFA until 2014. During this time he organised and judged in Australia’s first ever AIDA competition, held in Sydney in 2009. He has also organised some of the largest competitions in Australia and, when judging has been the Head of Safety for Australia’s largest competition to date, the Pan Pacific Championships in 2015. He has also been on the Board of the British Freediving Association and was the Treasurer on the Executive Board for AIDA International from 2010-2014.

Ben has been an AIDA International competition judge for over 10 years and is Australia’s most experienced judge, having been fortunate to judge in many locations in Australia and around the world. Seeing the rising talent of Australia’s freedivers over the years has been a huge thrill for him and a sign that the sport is thriving here in Australia.

In recent years Ben has taken some time off teaching and competing following some injuries during a Tough Mudder event (he’s always maintained that he is terrible on land) and spending time with his young family. During this time he came to the conclusion that he missed teaching too much and missed seeing the buzz of new freedivers as a whole new underwater world opens up to them. That look a new freediver gives you when they realise they’ve just done something they only dreamed they could do – there’s nothing else like it!