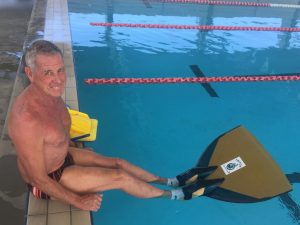 I’m an Assistant Instructor (AIDA 4 Master Freediver certification) with Freediving Gold Coast. I had a strong interest and fascination with being underwater from a young age. I was introduced to spearfishing at the age of 14 where I grew up in Burnie, Tasmania. In 1961, wetsuits weren’t around then, 58 years ago, so we shivered uncontrollably after each dive. We just accepted the cold. We didn’t know any different. I kept up spearfishing in Melbourne at Cape Schank from 1965 to 1969, before going to live in Vancouver Canada, where I did Scuba diving. I also did a Stuntman course and qualified in car chase, horse falls, saddle falls, western bar room fights, fast draw with Colt 45, and high falls from buildings. Had a few injuries, one quite scary.

After marrying Yvonne, the love of my life, I decided to come home and be a more ‘responsible ‘person and assume a normal lifestyle. At age 33, while living in Melbourne, I got the running bug, and developed a love for distance swimming, my longest swim was 16 km. I competed in Australia’s first Triathlon in I980, and ran several marathons. My best was 3 hrs and 58 seconds.

I moved to the Gold Coast in 1982, and pursued Triathlon until I got hit by cars twice, and suffered a broken hip from a bike accident. I decided to just focus on running and swimming. The bike had to go! I ran a lot of half marathons (PB 1:22) and a lot of 10Km runs (PB 44 mins).

I taught spearfishing to my 2 sons and still yearned for more breath hold knowledge. I met Sebastien Murat in 2006, and he gave me training, especially in FRC (Functional Residual Capacity). A few years later, I met Frank Gearon who encouraged me to hook up with Clint and Cristy, and as they say, the rest is history! I’m 72 and I run 50 km a week, and swim 3 days a week. I have completed AIDA 2, 3, and 4. I’ve had ups and downs in my first two Freediving Comps when, at 71 years of age, I did a STA 6 mins 10 seconds but at the next competition received a DNY DSQ SP.

Freediving to me is very relaxing (except when competing!). I feel very much ‘at home’ underwater, especially on exhale. I look forward to assisting students in pool and ocean training, as I like to encourage newer divers in this sport, and help them to enjoy it as much as I do. I retired from work 9 months ago, but not retired from passion in life!